Warning: "continue" targeting switch is equivalent to "break". Did you mean to use "continue 2"? in /homepages/40/d102026606/htdocs/MRGFUS_WCH/wp-content/plugins/revslider/includes/operations.class.php on line 2364

Warning: "continue" targeting switch is equivalent to "break". Did you mean to use "continue 2"? in /homepages/40/d102026606/htdocs/MRGFUS_WCH/wp-content/plugins/revslider/includes/operations.class.php on line 2368

The uterus is located in the lower abdomen between the bladder and the rectum. The uterus is also called the womb. It is pear-shaped, and the lower, narrow end of the uterus is the cervix. When a woman is pregnant, the baby grows in the uterus until he or she is born.

Some of the problems that can affect your uterus are:

• Noncancerous growths in the uterus, called fibroids, which can cause pain and bleeding
• Endometriosis, a condition in which the tissue that forms the lining of the uterus grows outside the uterus
• Heavy bleeding each time you have your period or between periods
• Hormonal imbalances
• Unexplained pelvic pain

Some of the Uterine Problems are

One in every four Indian women develops Uterine Fibroids, this is the single most common cause of infertility. Nearly 20-30% women in reproductive age group have fibroid uterus. At any given time, nearly 15-25 million Indian women have fibroid uterus.
Uterine Fibroids (also known as leiomyomas or myomas) are the commonest benign uterine tumors, with an estimated incidence of 20%–40% in women during their reproductive years.

Recently, Fukunishi et al. evaluated the thermal ablative effects of MRgFUS on Adenomyosis in improving clinical parameters in 20 premenopausal women; They reported that most adenomyotic lesions could be satisfactorily ablated, at 6 months, the mean uterine volume had decreased by 12.7%. Symptom severity score improved significantly during the 6 months of follow-up and no serious complications were observed.

Therefore, it seems that MRIgFUS represents a new, safe and effective method for the ablation of adenomyotic tissue. 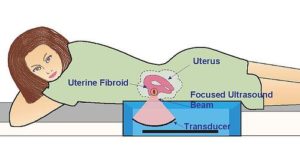 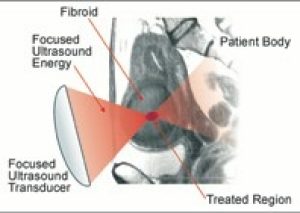 MRgFUS stands for Magnetic Resonance-guided Focused Ultrasound. This non-invasive technique uses an MRI thermal imaging system to continuously measure temperature changes inside the body, pinpointing and guiding the treatment. This is a relatively new, FDA-approved, treatment for uterine fibroids.