Uterine fibroids [UF] are benign tumours of smooth muscle cells and fibrous connective tissue that develop within the walls of the uterus. They are the most common gynaecological problem experienced by women, being of clinical significance in 20–40% of women of childbearing age.

UF are responsible for significant morbidity in the female population. The most common clinical symptoms are prolonged bleeding (30%), pelvic pain with or without dysmenorrhoea or pressure symptoms (34%), infertility (27%), and recurrent pregnancy loss (3%). Other symptoms associated with UF include anaemia (consequent on heavy menstrual bleeding), urinary incontinence, and sexual dysfunction. The cause of fibroids is unknown. Although there is little data on long term untreated prognosis of UF, it appears that symptoms from fibroids do not resolve spontaneously, although fibroids shrink after the menopause. 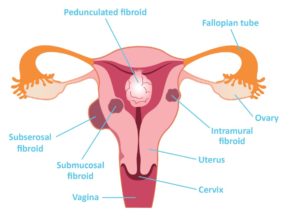 What are Common Symptoms of Uterine Fibroids?
Subserosal Fibroids

MRgFUS stands for Magnetic Resonance-guided Focused Ultrasound. This non-invasive technique uses an MRI thermal imaging system to continuously measure temperature changes inside the body, pinpointing and guiding the treatment. This is a relatively new, FDA-approved, treatment for uterine fibroids.

CALL NOW
+
Call me!
Book Appointment
Warning: count(): Parameter must be an array or an object that implements Countable in /homepages/40/d102026606/htdocs/MRGFUS_WCH/wp-content/plugins/quick-contact-form/quick-contact-form.php on line 67